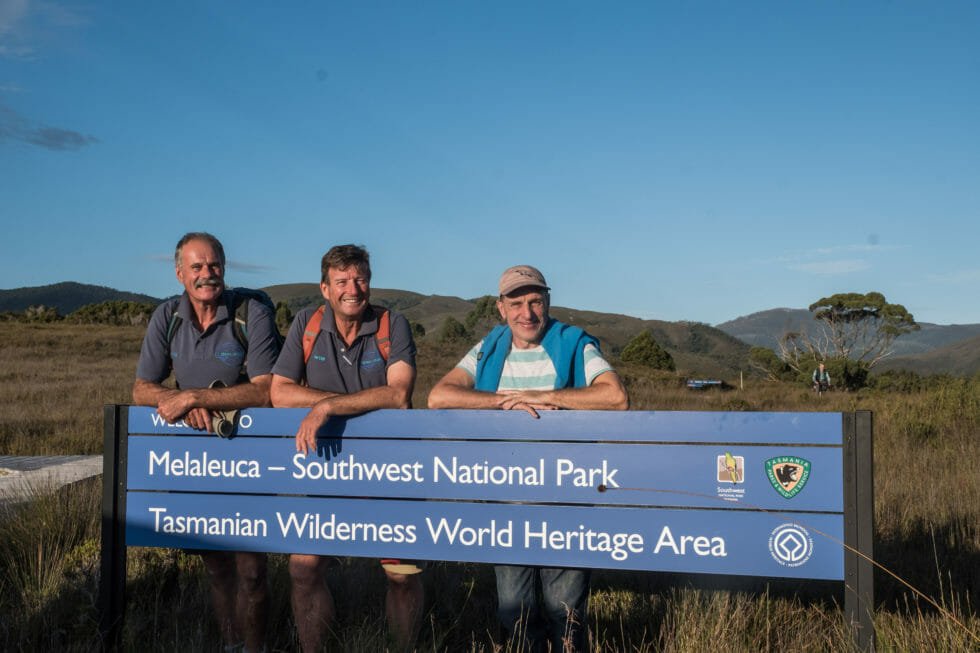 We often boast about the magnificent Port Davey, however today we will be taking a step back, focusing on our Port Davey portal: Melaleuca. Experiencing Melaleuca opens your eyes to both Tasmania’s history, and its pristine World Heritage Wilderness.

There are thought to be less than 50 pairs of these precious birds left in existence today due to the demise of their habitat. Visitors to Melaleuca have the breathtaking opportunity to see these incredible birds in action, with multiple viewing hides acting as the perfect peepholes. The parrots spend their breeding season in Port Davey before migrating to Victoria and South Australia for winter. Visitors will be also become familiar with parrot rehabilitators, such as Barbara Wilson, and what they do to protect the species from extinction.

An orange bellied parrot perched in its natural habitat

A lucky sighting of ten parrots perched atop a native tree

The History of Tin Mining at Melaleuca

Visitors to Melaleuca have the opportunity to explore the last standing tin smelter in Australia, formerly run by long-time residents and neighbours to Deny King, Peter and Barbara Wilson, until its closure in 2007. The couple previously worked in mines in Africa and other parts of Australia before making their way to Bathurst Harbour in 1974. Peter passed away in 2011; however, Barbara continues to devote much of her time to the Southwest, tirelessly volunteering as a rehabilitator of one of Australia’s most threatened species, the orange-bellied parrot (pictured below). For her tireless efforts, Barbara was added to the Tasmanian Honour Roll of Women in 2009.

Some of our guests exploring the old tin mine

Because of local legend, Deny King – the sole builder of the Melaleuca Airstrip – it is now possible to enter this remote area via a short 50-minute flight from Hobart. Without its construction, access would be limited to those with either boat access or a willingness to endure a seven-day hike. Deny King was the first to open up our southwest wilderness to tourism, single-handedly building the walkers accommodation. Although he passed away in 1991, Deny’s ashes remain in his home of 55 years, Melaleuca.

Our skipper, Piet, greeting some of our guests

Following his passing, the Deny King Heritage Museum was established, containing heritage objects and information on Deny’s time in and impact on Melaleuca. The museum was kindly constructed by a number of volunteers, enthusiastic about keeping our Southwest history alive. The museum contains objects pertaining to Melaleuca’s tin mine, geology, plant life, family archives and historical records. Many people travel to the area with the sole purpose of visiting the museum, and it is well worth it.

Some of our guests exploring the Deny King Heritage Museum

The Melaleuca Inlet acts as our pathway to the Odalisque. From the airstrip, it is a scenic thirty-minute boat ride in our tender to the Odalisque’s deck along this tannin-stained tributary. The water in this inlet, and in much of Bathurst Harbour and the Port Davey area, is a clear and a rich, deep brown colour, like a good black tea. The water gains its colour from the tea-tree (melaleuca), which lines the hills and rivers through most of this area.

Cruising down the Melaleuca Inlet

For those who are less interested in the history and keener for adventure, stemming from the Melaleuca Airstrip, there are two challenging walking tracks: The South Coast Track (6-8 days), and the Port Davey Track (4-5 days). These multi-day walks provide both a challenge and an opportunity for growth, with the secluded tracks offering time for reflection and getting back to nature.

One of the many incredible Melaleuca walks

This Aboriginal interpretive loop walk at Melaleuca is a collaborative partnership between the Parks and Wildlife Service and the Tasmanian Aboriginal Land and Sea Council that provides an intimate and visual Aboriginal cultural interpretive experience for visitors. Innovative installations along the 1.2km boardwalk through the forest and buttongrass plains beside Melaleuca lagoon share the stories of the Needwonnee people of the Southwest.

Guests reading about Melaleuca’s indigenous history on the Needwonnee Walk

Want to Find out More?

We believe there is an experience for every explorer in Melaleuca, and that’s why we love to share it with our guests. If you’d like to find out more about Melaleuca and the Southwest region, visit our adventure map now.